Until Easter 2018 our Rector was Archdeacon Gary Hastings. The priest-in-charge during the interregnum is Dean Alistair Grimason. 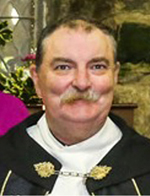 “I was born in 1957 in Dungannon, a middle-sized market town in County Tyrone and grew up a member of St Anne’s Parish, properly known as Drumglass, in the same town. I went to the local primary school and received my secondary education at The Royal School Dungannon. I then attended Trinity College Dublin where I did most of my Ministerial Training ( as well as many other very interesting and enjoyable things ) and graduated in 1979.

My first placement was a 6-month stint as a lay chaplain to Craigavon Area Hospital near Portadown with some general parish assistant work in Seagoe Parish.

I was made deacon by Bishop Arthur Butler on St. Thomas’ Day, 21st December 1979 and ordained priest the following year. For the next 3 years, I served as curate assistant in the parish of Joanmount in North Belfast.

My second curacy was served in Dublin’s North Inner City in the parish of North Strand and Drumcronda with St. Barnabas.

During my time in Holy Orders I have served on Standing Committee, The Representative Church Body, General Synod, Priorities Allocations Committee, Central Communications Board, Pioneer Ministry Steering Group as well as every diocesan committee in both the diocese of Meath and Kildare and TKA. I was also a member of the Chapter of St Patrick’s Cathedral, Dublin for almost 10 years.

I was married to Vivienne for 28 years until her death in 2008. I have 5 daughters, two grandchildren, 2 cats and a dog. My passion is angling. Mostly salmon and trout angling. I also love rugby (watching …my playing days are long over!), cricket, travelling to places where the sun shines (mostly France), camping, messing about in my boat on Corrib and eating rich and very unhealthy (but delicious) food. I also sing a bit, play the occasional guitar and read voraciously….everything from Bill Bryson to Voltaire to Conan Doyle to Camus.”