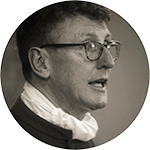 Mark has been organist at St Nicholas’ since 2006, and director of the Schola Cantorum since its founding in 2012. He is one of Ireland’s most well-known choral specialists, and is the founder-director of the chamber choir Resurgam. A busy freelance career includes leading workshops and masterclasses for choirs and conductors in Ireland, the UK, and continental Europe. Mark is a New Zealander, and studied at Auckland University followed by postgraduate studies at the North German Organ Academy and Amsterdam’s Sweelinck Conservatorium, where he was an organ pupil of Jacques van Oortmerssen. Mark came to Ireland in 1992 and has held several major posts in the country, including organist and director of music at Christ Church Cathedral Dublin, chorusmaster to the RTÉ Philharmonic Choir and artistic director of the Irish Baroque Orchestra.