References to an organ in the church stretch back as far as 1561, when Nicholas Lynch fitz Stephen, mayor of Galway for the second time, had an organ made and placed in a newly built tower in the Lynch (south) Transept. There is no extant information about the nature of that organ nor its use. In July 1726, Galway Corporation bought an organ from Mr Symon Kirwan, in consultation with Mr Thomas Staunton, and paid “not exceeding £130 for said organ, for fixing the same in the said church, and for keeping the same in repair for three years”. The organ was placed in a loft over the north transept, where it stayed for 100 years. It appears likely that there was no organ, nor organist, between 1826 and 1846; parishioners of the time later recalled the singing being led by two ladies playing the harp. 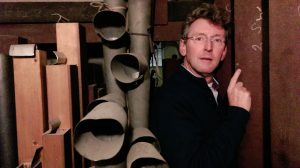 The current organ in St Nicholas’ Collegiate Church was built in 1912 by the celebrated British firm of Norman & Beard, incorporating a small amount of pipework (subsequently much revoiced) from an earlier JW Walker instrument of 1845. It remains largely in its 1912 state, although subsequent repairs and overhauls took place in 1945, 1957-9, 1963, 1977-8 and 1982, during which most of the original tubular pneumatic actions were discarded in favour of electro-pneumatic replacements. These actions have become increasingly unreliable and unresponsive, and the pipework and windchests have suffered over the years from water inundation. In certain weather conditions the resultant ciphers and runnings can rend the organ unplayable. 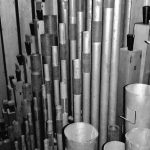 Thus the organ as it stands is now only partially playable and tunable, with unusable stops identified in the following specification. In addition to these ranks, there can be occasional faults and ciphers on other stops. The combination system is also only partially usable – the three Swell combination pedals giving pp, f and ff levels still operate.

The organ is currently maintained by Trevor Crowe, who (together with the St Nicholas’ music staff) makes every effort to keep the organ in tune and functioning. Despite its condition, it can make a fine impression in the building, although its location in a chancel chamber at some distance from the nave inevitably reduces its impact there, and accompaniment of the choir in the nave choir stalls is a challenge of coordination.

The Select Vestry of St Nicholas’ is currently considering proposals for a rebuilding or replacement of the organ.