St Nicholas’ Parochial School is a co-educational school with a long tradition of serving the youth of Galway. It is centrally located in Woodquay, beside the Town Hall Theatre and is within walking distance of NUI Galway and University Hospital Galway. Its website is here: http://www.galwayschool.com. 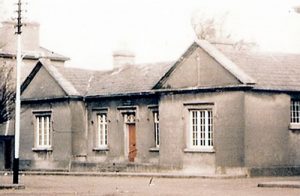 The Church of Ireland School of the parish of St. Nicholas or St. Nicholas Parochial School has been in existence on its current site since the closure of the Galway Model School at Shantalla in 1926. It was in that year that the pupils moved to the Buckland Building which had been leased in 1892 from the Governors of the Erasmus Smith Schools by a group of trustees which include the Reverend Fleetwood Berry, Rector of St. Nicholas Collegiate Church. The first Headmistress of the Parochial School was succeeded by Miss Aitken in 1931.

Miss Aitken continued to teach here until her retirement in 1960 by which time she had been in charge of the school for 29 years. Pupils who attended the school at that time remember the large, cold classroom which was heated by a turf burning stove. A photograph of the old Georgian Buckland Buildings hangs in the corridor of the present school together with one of the building which replaced it following its demolition in 1964. At that time there were only fourteen children on the school roll and it was felt that a single classroom would be adequate for the needs of all of those who wished to attend.

On 28th September 1965 the new school was officially opened by a representative of the Department of Education. In 1985 the school was refurbished and extended to provide four classrooms and cater for the needs of growing numbers. New PVC windows were fitted in the building at Easter 2002.

St Nicholas’ Parochial School is a six teacher school and comprises of 92 pupils from many different nationalities, different religious and non-religious backgrounds.

The school aims to provide an opportunity for each child to reach his/her potential in a co-educational setting and a friendly Christian atmosphere. It aims to develop in each child the capacity to think clearly, creatively and critically and is a place where moral values such as honesty, truthfulness, justice, fairness, sensitivity to others and civic responsibility are nurtured and protected.

This school offers a wide range of extra-curricular activities- Swimming, Hockey, Drama, Chinese, French, Zumba and Yoga. Preparation classes for First Holy Communion and Confirmation are available after school. Pupils attending this school have access to an After-School Facility.

Due to the central location of this school, the pupils have the opportunity to attend many different educational events held in The Town Hall Theatre, Dubray Book Shop, The Black Box, The Museum, The Library and many other interesting locations.

The majority of our sixth class pupils now transfer to secondary schools in the Galway area.

Should you require further information about this school please contact The Principal, Wendy Walsh, via e-mail at galwayschool@gmail.com phone 091 569 233. A recent Whole School Evaluation inspectorate report may be viewed on the school website.